Cost Analysis of Hemiarthroplasty Versus Reverse Shoulder Arthroplasty for Fractures

Complex proximal humerus fractures in older patients can be treated with hemiarthroplasty (HA) or reverse shoulder arthroplasty (RSA), with both providing good pain relief and function. This study compared the costs, complications, and outcomes of HA vs RSA after proximal humerus fracture in older patients. Patients 65 years or older who were admitted between January 2007 and August 2011 with a 3 or 4 part proximal humerus fracture and treated with HA or RSA were identified. Surgeries were performed at the same institution by 1 of 3 surgeons trained in trauma or shoulder surgery. Operating room costs, implant costs, total costs to the patient and hospital, and range of motion were compared. In the study group, 8 patients (7 women and 1 man; mean age, 77 years) received HA and 16 patients (13 women and 3 men; mean age, 77 years) received RSA. Hemiarthroplasty implant cost and operating room cost were $9140 and $8900 less than those of RSA, respectively (P<.001). The total cost to the patient was $33,480 for HA vs $57,000 for RSA (P<.001) with no difference in admission length, transfusion requirements, or final range of motion. In patients with complex proximal humerus fractures, RSA restored function similar to HA and resulted in better pain and outcome scores. However, RSA had a significantly higher cost to both the patient and the hospital compared with HA. Further investigation of postsurgical rehabilitation costs, skilled nursing needs, or revision surgery will elucidate whether there is long-term functional or financial benefits to RSA over HA. [Orthopedics. 2016; 39(4):230-234.]

Complex proximal humerus fractures that may require arthroplasty include fracture-dislocations, comminuted head splitting fractures, and complex fracture patterns with significant risk of avascular necrosis.4 Treatment of such fractures in older patients with hemiarthroplasty (HA) has had inconsistent results due to failure of tuberosity healing, continued pain, loss of motion, infection, and posttraumatic glenoid degeneration.5-8 Recently, treatment with reverse shoulder arthroplasty (RSA) has been shown to provide good pain relief and restoration of function with complication rates that compare favorably with alternative treatments.9-11

The issue of rising costs related to surgical outcomes continues to be a main focus in health care. Justification for the increased cost of RSA has come into question recently despite its proposed benefit to improving pain and function compared with HA.11 This study compared (1) range of motion and American Shoulder and Elbow Surgeons (ASES) total and pain scores, (2) rate and cost of complications, (3) charges to the patient, and (4) charges and reimbursement to the hospital system in patients with 3and 4part proximal humerus fractures treated with arthroplasty. The current authors hypothesized that both the hospital and the patient would experience higher costs of care associated with RSA, but patients receiving this treatment would have improved range of motion, pain, and outcome scores compared with patients treated with HA.

After receiving institutional review board approval, a retrospective chart review was performed. The institution’s Medicare database was queried for shoulder arthroplasty procedures performed for proximal humerus fractures in patients 65 years or older from January 2007 to August 2011. Patients with 3 or 4 part proximal humeral fractures treated with either HA or RSA were included in the study. All arthroplasties were performed at a single institution by 1 of 3 surgeons (1 surgeon trained in trauma surgery and 2 surgeons trained in shoulder surgery).

During the study period, 24 patients underwent shoulder arthroplasty for a proximal humerus fracture (20 women and 4 men). After reviewing the patients’ medical comorbidities, level of function, and preoperative radiographs, a determination was made by the treating physician for HA or RSA. The surgeons’ training and comfort with implant options also contributed to their decision-making process as the surgeon trained in trauma surgery did not perform any RSAs. The ultimate indication for using RSA rather than HA was based on the patient’s prior history of rotator cuff disease, severe tuberosity comminution preventing reconstruction, or radiographic evidence of rotator cuff arthropathy.

Outcomes were assessed at final follow-up with ASES total and pain scores, and range-of-motion (ROM) measurements. The All Patient Re ned (APR) mortality index was calculated for each patient to compare operative risk and severity of illness. Length of hospital stay and packed red blood cell transfusion requirements also were recorded. Imaging was obtained preoperatively and postoperatively, and patients were evaluated at 1 week, 1 month, 3 months, and at final follow-up (18 to 73 months) after the initial operation.

All surgeries were performed in the beach chair position with prosthesis placement via the standard deltopectoral approach. The greater and lesser tuberosity fracture fragments were identified and tagged for later reduction and repair. The biceps tendon was routinely tenodesed to the pectoralis major tendon. Two drill holes were made in the humeral shaft for subsequently securing the tagged tuberosity fragments.

The Bigliani/Flatow hemiarthroplasty prosthesis (Zimmer, Warsaw, Indiana) and the Aequalis reverse shoulder system (Tornier, Bloomington, Minnesota) were used for HA and RSA, respectively. All implants were cemented and placed in 20° of retroversion relative to the trans-epicondylar axis. Cerclage sutures were placed around the inferomedial border of the prosthesis as described by Boileau et al.12

Postoperatively, patients were in a sling for 3 weeks while allowing active elbow, wrist, and hand range of motion. Patients began pendulum exercises at 1 week and shoulder active range of motion at 3 to 4 weeks. All patients participated in physical therapy postoperatively.

Cost data were retrieved from the hospital’s Medicare database. Implant manufacturers were contacted to con rm implant prices during the study period. All physical therapy was performed within the study site’s hospital system.

Data were analyzed with parametric and nonparametric tests using SPSS (IBM Corp, Armonk, New York). The aforementioned outcomes measured and the surgery-related parameters and costs were compared between HA and RSA with significance de ned as P<.05.

In this retrospective study, 8 patients underwent HA and 16 patients underwent RSA. Both groups of patients were similar in average age, sex, and complication rate (Table). All patients survived to final follow-up. Mean length of clinical follow-up was 43 months (range, 18-73 months). Mean age at the time of injury was 77 years (range, 68-96 years) in the HA group and 77 years (range, 65-88 years) in the RSA group (P=.94). All fractures were the result of a low-energy fall. 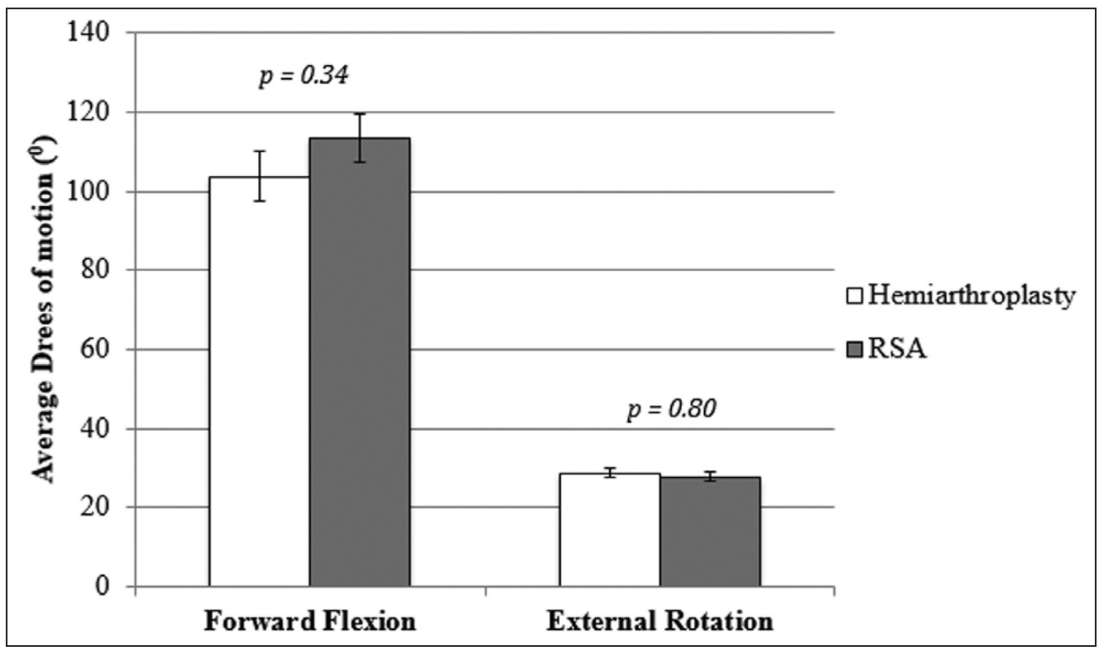 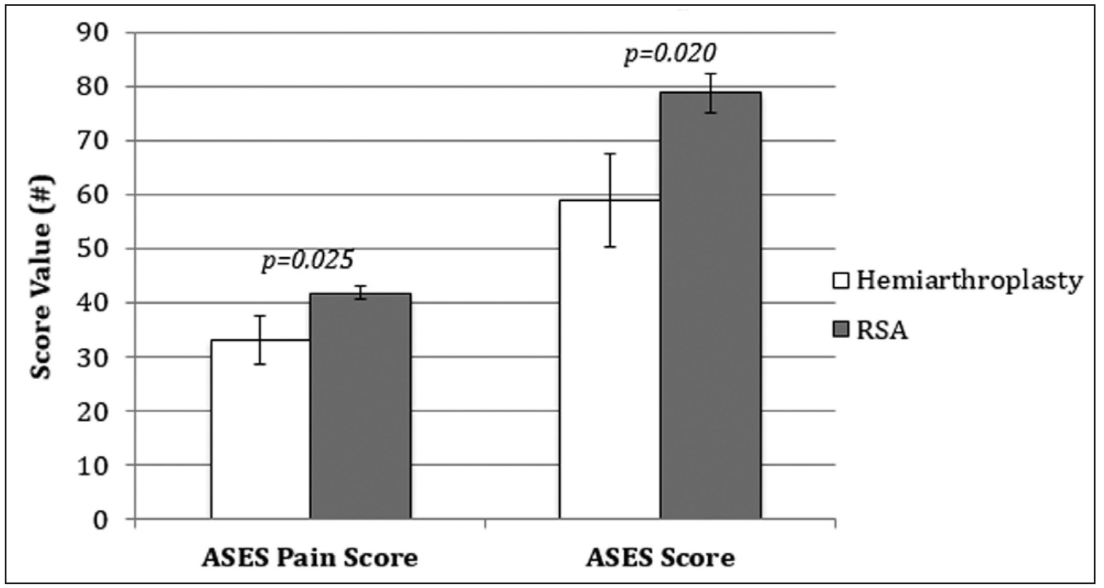 There were 2 incidences of greater tuberosity nonunion in the HA group; 1 of these patients progressed to anterosuperior escape. Neither of these patients has elected to undergo revision arthroplasty. In the RSA group, there was 1 incidence of scapular notching that was classified as grade 2 according to the Nerot-Sirveaux classification at final follow-up. There was no humeral implant loosening in either group. 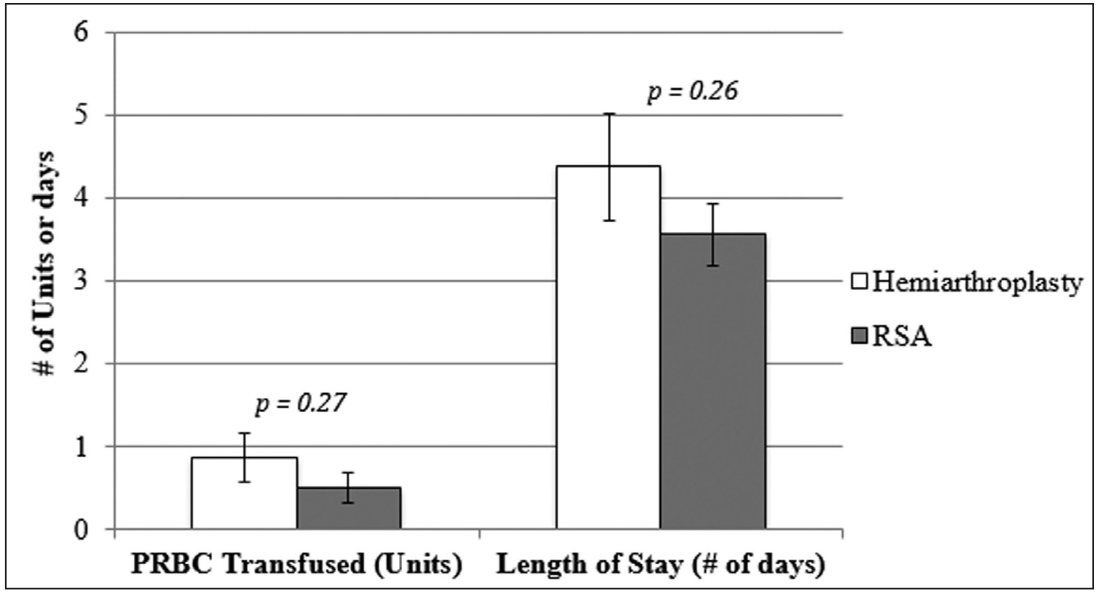 Additional surgical procedures were required in 3 patients. In the HA group, a 65-year-old woman developed a postoperative infection within 2 weeks of surgery; she required readmission for open irrigation and debridement. This patient was a poorly controlled diabetic with a hemoglobin A1C of 9.1%. The total cost to the hospital for this readmission was $19,995.

In the RSA group, 2 patients sustained complications. A 67-year-old man fell out of bed on the night of surgery and sustained a dislocation. This required an operative open reduction with exchange to a larger polyethylene liner. The second patient, a 79-year-old woman, presented to the clinic 2 weeks following her surgery with a dislocated shoulder that had occurred during physical therapy. She required an open reduction and exchange to a larger polyethylene liner. The total costs of readmission for these complications were $13,255 and $13,600, respectively.

Using shoulder arthroplasty to treat older patients with complex proximal humeral fractures and osteopenic bone is difficult. Antuña et al5 retrospectively reviewed 57 patients (mean age, 66 years) who underwent HA to treat acute proximal humeral fractures with a minimum follow-up of 5 years (mean, 10.3 years). They found that 30 of 57 patients had unsatisfactory outcomes according to a modified Neer result rating system, and 16% had moderate to severe pain at final follow-up.5 Most of the poor results were attributed to poor rotator cuff function or nonunion of the tuberosities.5

The use of RSA has the theoretical benefit of relying less on rotator cuff integrity and tuberosity union, and it has shown good results when used for glenohumeral arthritis, rotator cuff deficiency, and pseudoparalysis. In a systematic review of 15 studies with 377 patients treated with RSA and 504 patients treated with HA for proximal humeral fractures in older patients, MataFink et al13 found patients who underwent RSA had improved forward flexion and outcomes scores, but diminished external rotation, with similar complication rates. In a retrospective review of 32 patients older than 65 years who underwent RSA for acute proximal humeral fractures, Lenarz et al11 found patients attained a mean active forward elevation of 139° and a mean visual analog pain score of 1.1, with no evidence of component loosening or need for reoperation. In a meta-analysis of 9 studies that included a total of 247 patients, Anakwenze et al14 found RSA treatment of proximal humerus fractures had improved external rotation with tuberosity repair leading to an average forward flexion of 113° and average external rotation of 26°.

The impact of an older patient sustaining a proximal humeral fracture can be significant, both to the patient as well as to the health system. Jain et al15 showed lower costs associated with treatment of proximal humerus fractures have been found to correlate with surgeon volume (≥20 shoulder arthroplasties performed per year), open reduction and internal fixation over HA, and fewer comorbidities.15 Ponce et al16 reviewed the 2011 Nationwide Inpatient Sample database and found RSA to be an independent risk factor for increased inpatient morbidity, mortality, and hospital costs compared with anatomic total shoulder arthroplasty.

This study has several limitations. It is a retrospective study at a single institution with surgery performed by orthopedic surgeons from 2 subspecialties including traumatology and shoulder surgery. As such, there may have been training dependent bias toward treatment with HA or RSA. In addition, the sample size was relatively small. Longer follow-up may reveal further complications including need for conversion of HA to RSA10,17 or failure of the reverse prosthesis from loosening, scapular notching, or fracture.

Three and 4-part proximal humerus fractures in older patients may be managed with HA or RSA. Although this study found the cost of RSA to the hospital and the patient exceeded that of HA, the pain relief and outcome scores were significantly improved with RSA, and the complication rates of RSA were similar with those of HA. Future work examining longer-term follow-up may give a different representation of complications and related costs for HA vs RSA. Finally, the increased use of RSA and subsequent decreased cost that is occurring in the US market may make its use less controversial when appropriately indicated for the treatment of complex proximal humerus fractures.